An Amazing Project by Davpart In The Heart Of Downtown Toronto.

Request For Your %1 Cashback

The United Bldg is located at 481 University Avenue Downtown Toronto. It is designed to make a statement. The United Bldg. is North America’s largest heritage retrofit. Complementing the stateliness of the boulevard on which it rises, United’s architecture takes cues from its urban and spatial contexts. A place that has a distinct sense of purpose. One that will endure and stand tall in the changing skyscape of Toronto. The new design preserves elements from the 1928 building and the 1961 expansion. The building’s iconic tower is defined by its impressive verticality. To highlight its heritage features, the tower mass is set back and broken into two elegant slim forms. While this reinvention is subtle and respectful, it introduces a residential component, a rare entity on University Ave. United’s bold story of art and renewal continues at the street level. Dundas and University, a striking colonnade will create an engaging pedestrian realm. This spectacular galleria will house retail and restaurants. The United Bldg. is an essay on balance and flourish. A striking update. A grand addition. 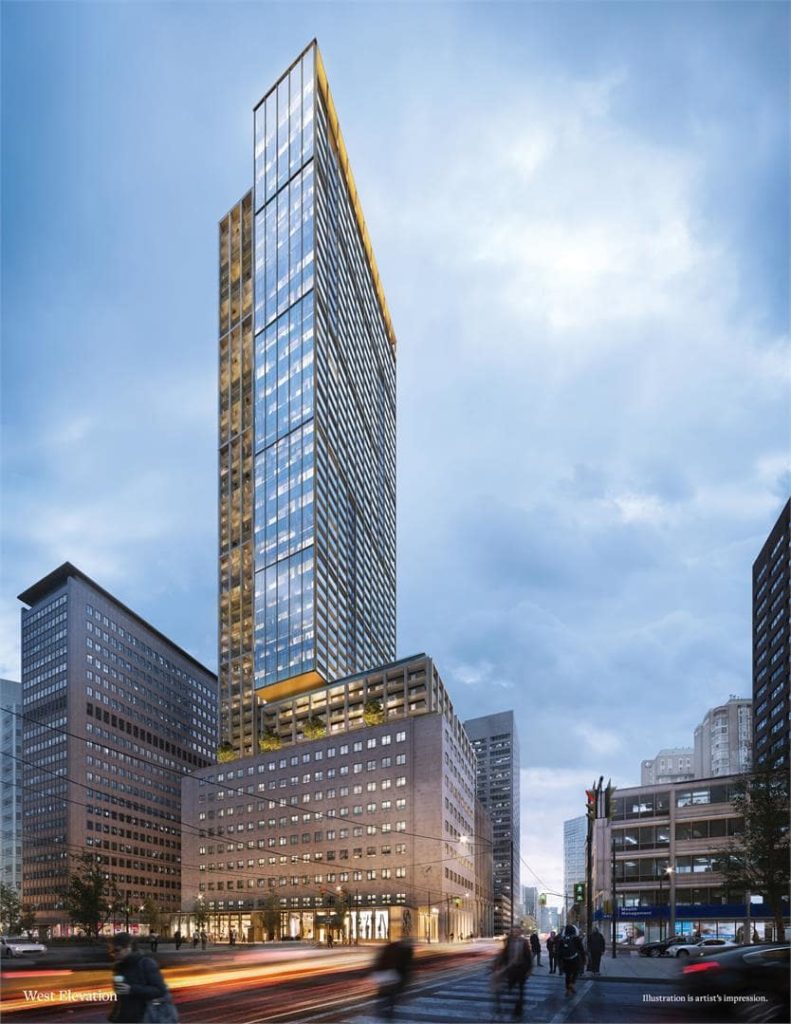 Request Floor Plans
Register and Get Your %1 Cashback

Elegant and flawlessly executed, they have been designed to enhance the lives of its residents. Spread across three floors, they offer a soul-caressing experience. United’s public spaces are inspired by the richness of the building’s past and its unique place in the heart of a burgeoning modern city. Dressed in natural stone, bronze metals, sparkling hand-blown glass, and tailored wood paneling, the theme here is one of elegance and refinement. A cossetted haven of luxury, the residential lobby is a throwback to the gilded 1920s. With its plush seating, fine art, and thoughtful services like a 24-hour concierge, it’s both inviting and awe-inspiring. Classic yet contemporary, they’re designed to complement a very downtown sensibility.

ABOUT THE UNITED BUILDING CONDO

Register and get %1 cashback

Conceived as a major civic boulevard, University Ave is designed for the highest possible effect. Inspired by European counterparts and laid out in circa 1820, it was considered, ‘one of, if not the finest in the Dominion, or perhaps on this Continent.’ While it has expanded and evolved over the years, University Ave has always been a microcosm of the urbanization of Toronto. At the corner of University and Dundas, The United Bldg.’s stellar location taps into the boundless energy that pulses through it. With direct access to St. Patrick subway and the 505 streetcar outside its front door. walking distance to #1 University in Canada, University Of Toronto and Ryson University. The United Bldg. is close to topnotch hospitals, the Four Seasons Centre for the Performing Arts, Nathan Phillips Square, fine restaurants and cafes. Some of the best transit options and proximity to Toronto’s most engaging destinations, there’ll always be plenty to do and experience here. From morning to evening, sunrise to sunset, The United Bldg. embraces the energy and verve of a location that can only be described as unmatched.

This location is an excellent spot in downtown Toronto.

Register now to receive %1 cashback from us

We don’t just sell properties, we make it easy for you to find your best affordable home

Register and Get %1 cashback

The Face Behind Our Success

Send Us a Message

If you would like to make contact with us, please feel free to send a message. We would be happy to answer your questions and set up a meeting with you.